101 Crucial Lessons They Don't Teach You In Business School

Forbes said "1 of 6 Books Every Entrepreneur Needs to Read Right Now". These concepts are not taught in MBA schools!

Business Insider wrote an article stating that 101 Crucial Lessons They Don't Teach You in Business School was voted as the #1 most popular business book of the year by Business Insider readers.

Forbes magazine said that 101 Crucial Lessons They Don't Teach You in Business School is "1 of 6 books that all entrepreneurs must read right now" (along with " The 7 Habits of Highly Effective People" by Stephen Covey, "The Lean Start-up" by Eric Ries, Peter Thiel's book "From Zero to One", and The Self Made Billionaire Effect.").

In this course you will learn how to get a meeting with anyone. You will learn how to take your career to the next level. You will learn how to reinvent yourself in ways that you never thought was possible! Chris Haroun has had the opportunity in his career to meet with the top CEOs, entrepreneurs and investors in the world, including Warren Buffett, Bill Gates, Marc Benioff and the CEOs of most large technology companies. This book is an amalgamation of business advice that Chris has compiled from his many meetings with successful business people over the past two decades as well as observations of why brilliant entrepreneurs like Steve Jobs or Mark Zuckerberg have become incredibly successful. Business schools do a good job of providing students with theoretical and practical frameworks that can be applicable to real world problems but often miss teaching students some of the most crucial business lessons like how to network, how to find customers or how to get a job!

Chris Haroun is an award winning business school professor, venture capitalist and author. He is currently a venture capitalist at a prominent San Francisco Bay Area venture capital firm and has previous work experience at Goldman Sachs, hedge fund giant Citadel, Accenture and several firms that he has founded. He has raised and has managed over $1 billion in his career.

Chris has an MBA in Finance from Columbia University and a Bachelor of Commerce Degree with a major in Management Information Systems and International Business from McGill University. Chris is also a frequent guest lecturer at several Bay Area business schools including Berkeley and Stanford. He is a McGill University Dobson Fellow. He has written numerous articles/been interviewed in Forbes, VentureBeat, Entrepreneur Magazine, Wired Magazine, AlleyWatch and Radio Television Hong Kong (RTHK: Hong Kong's oldest and sole public service broadcaster). He serves on the boards of several Bay Area technology companies and charities. Chris Haroun is originally from Canada and currently lives in Hillsborough, California and enjoys playing baseball with his wife and three sons. 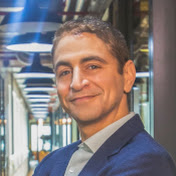 Chris has sold more than 1,000,000 of his online business & self improvement courses in 12 languages in 210 countries and his courses have been profiled in Business Insider, NBC, Inc, Forbes, CNN, Entrepreneur & on other business news websites. Chris is the author of the #1 best selling online business course called "An Entire MBA in 1 Course" & many other business and personal development courses.

He’s the author of the book "101 Crucial Lessons They Don't Teach You in Business School," which Business Insider wrote is "the most popular book of 2016." Forbes called this book "1 of 6 books that all entrepreneurs must read right now."

Chris is the founder & CEO of Haroun Education Ventures, an award winning business school professor, MBA graduate from Columbia University & former Goldman Sachs employee. He has raised/managed over $1bn in his career.

He is a frequent guest lecturer at several Bay Area MBA schools including Berkeley & Stanford. He also has an undergraduate degree with a major in Management Information Systems & International Business from McGill University where he is a McGill University Dobson Fellow (awarded for his work mentoring students with start up business models).

He has founded several companies & serves on the boards of several Bay Area companies & charities, including LEMOfoundation.org & Providing Opportunities for Women. He lives in Hillsborough, California.

According to Business Insider "Haroun is one of the highest rated professors, so you can expect to be in good hands through the course of your education."

He is passionate about education as he believes that all problems can be solved via education.

When does the course start and finish?
The course starts now and never ends! It is a completely self-paced online course - you decide when you start and when you finish.
How long do I have access to the course?
How does lifetime access sound? After enrolling, you have unlimited access to this course for as long as you like - across any and all devices you own.
What if I am unhappy with the course?
We would never want you to be unhappy! If you are unsatisfied with your purchase, contact us in the first 30 days and we will give you a full refund.
off original price!